First part of a series detailing the theory, practice and subterfuge of Indian Marxists in the history establishment 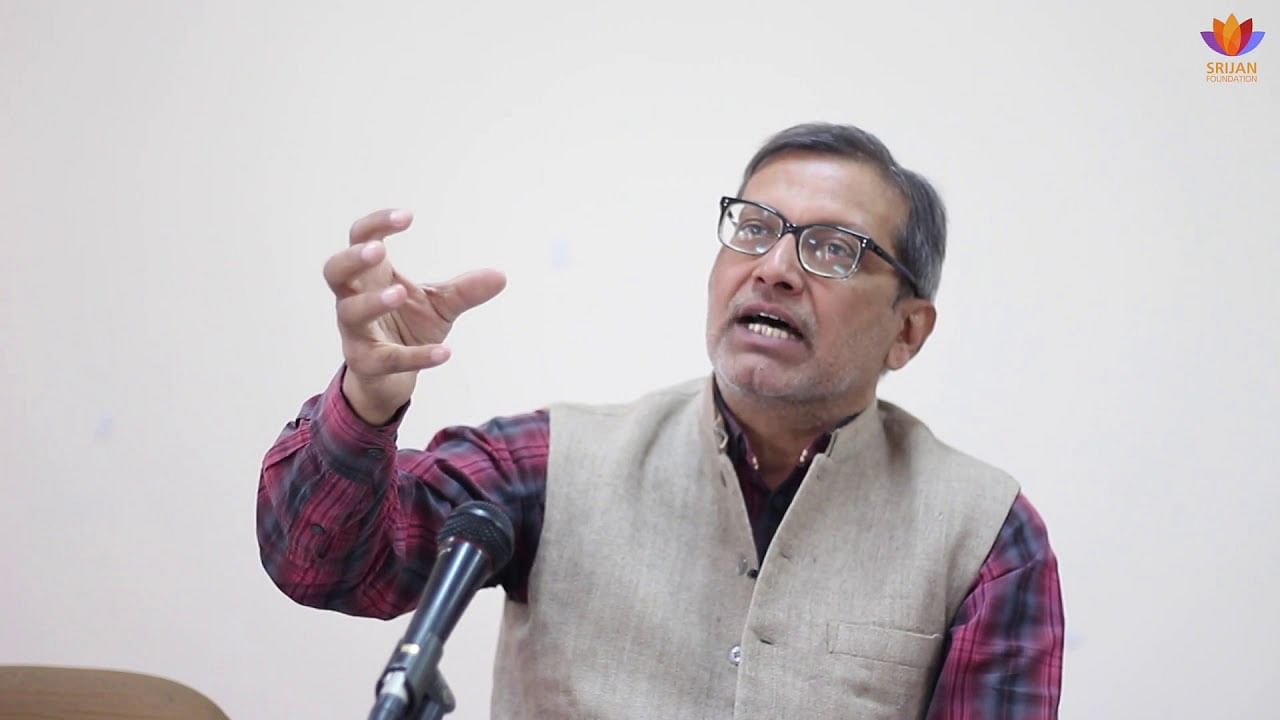 Jan 11, 2020, 1:57 PM
Ideology – that is what gives the evildoing its long-sought justification and gives the evildoer the necessary steadfastness and determination. That is the social theory which helps to make his acts seem good instead of bad in his own and others’ eyes, so that he won’t hear reproaches and curses but will receive praise and honours.
Aleksandr Solzhenitsyn, The Gulag Archipelago

An eminent Indian author has quoted the following sample of Marxist history–writing in one of his essays:

In 1975, the Prime Minister Indira Gandhi had a “Time Capsule” buried in Delhi. That was during the Emergency. Indira Gandhi lost the 1977 election. Janata Party formed the Government. It was then rumored that the madam got the Time Capsule buried to make herself immortal in history. It must be a sheer eulogy of the Nehru family. Janata Party government exhumed the Time-Capsule. It contained the history of our times in just three thousand words. There were no other names in it - not ever the name of Mahatma Gandhi. It was said that the writer was paid three to four lakhs Rupees. The matter was thrust upon him. It was all about Nehru, Nehru, Indira, Indira--only that he was forced to write.
Later on, an article by that writer who was a professor from Madras, was published. He wrote that Dr. Sarvepalli Gopal called him to Delhi and entrusted him that job. He was only paid living expenses in Delhi, which was so inadequate that he was required to spend from his own pocket. What to talk of lacs, he was not paid a single rupee. Neither Indiraji nor any of her henchmen said anything to him. He was asked to write history in 3000 words, which he did.
The Calculated Destruction of History Writing in India in Five Stages

This was a small specimen of the principle or art of Marxist history writing in India (The time quoted in the above quotation is wrong. The ‘Time Capsule’ was buried in the Red Fort at the hands of Prime Minister Indira Gandhi: on August 15, 1973 and was brought out on Dec. 8, 1977 in the presence of Pratap Chandra, the then Union Education Minister).

Dr. Krishnaswamy had written such distorted account of modern India under the guidance of Prof. S. Gopal for the benefit of the humanity of the distant future. Prof. Gopal was earlier an officer in the Ministry of Foreign Affairs and later was made a Professor of History in the Jawaharlal Nehru University (JNU), New Delhi. When the Time Capsule was removed, Prof. Gopal was the Chairman of the Centre for Historical Studies in JNU. The comments of Prof. Gopal and other Marxist historians over the history text put in the Time Capsule were most amusing. They are perfect examples not only of their sense of history but also of their moral standards and political opportunism.

Who is a Marxist Historian?

Who can be called a Marxist historian? There was a time when many like Ram Sharan Sharma, Bipan Chandra, Iran Habib boastfully called themselves Marxist historians. There were also other Marxists or crypto-Marxists who preferred to call themselves only ‘progressive’, ‘modern’, ‘new’ etc. to assert their non-party approach. This was because of the democratic set up in India where an open party-mindedness could also be taken as a sign of prejudice in the eyes of the broad intellectual circle of the country. But the phrases, terminology and mode of analysis of this later group of historians was the same as found in Marxist writings. The situation has greatly changed since those days.

Those who claimed to be Marxists three decades ago now hesitate to do so. For instance, Ram Sharan Sharma now claims he is ‘only a historian’. The rest have also started using adjectives like ‘secular’, ‘liberal’ etc. so that they may not lose their name and fame in the wake of the heavy devaluation of Marxism in the world market. Therefore, they have started using different phrases instead of well-known Marxist ones. For example ‘group struggle’ in place of ‘class struggle’, ‘economic structure’ in place of ‘production relations’ etc. In similar way, they now contrast ‘Secular’ and ‘Communal’ in the place of earlier ‘Progressive’ and ‘Reactionary.' But a careful reading of their articles, books, speeches expose their old allegiance to the Marxist superstitions. After all, from where can they get a new set of ‘world outlook’ unless they totally discard Marxist dogmas and political orthodoxy connected with it? Since they have not done this, we may regard such historians as Marxists on the basis of their writings, political activism, organizational associations and mutual support. This will be so even though many of them now pose that they are not Marxists, that they have just used some Marxist categories in studying history and so on.

In a detailed interview published in the leftist weekly Link Prof. S. Gopal asserted, “It was as ridiculous to dig up the time capsule as it was to bury it.” He incidentally evaluated the two governments responsible for the two acts. “It is tragic that we have replaced a right-wing fascist dictatorship with a right-wing communal reactionary Government.”

In other words, Prof. Gopal showered some of the choicest abuses from the Marxist lexicon on the two governments, one led by Mrs India Gandhi and the other which replaced it. At the time he was accompanied by his worthy colleague Prof. Bipan Chandra when he made this statement. Have our learned readers ever read or heard of this evaluation of the Indira Gandhi government by the Marxist historians? Does Prof. Bipin Chandra who has been receiving all kinds of lucrative positions, honours and rewards from the successive Congress governments for years accept or accepted India Gandhi as a ‘right-wing fascist dictator’? Only recently he has described the Indira Gandhi of 1971-77 as, “standing for the unity and independence of the country and in particular of being secular and pro-poor”.

It was for the same Indira Gandhi then Prof. Gopal used the epithet ‘right-wing fascist dictator’ with Prof. Bipan Chandra standing by his side. Does this kind of time-serving not expose political opportunism of all Marxist professors who evaluate a political leader or government according to the current political situation and issuing pompous statements? Does it all go well with Prof. Gopal’s scholarly abilities or moral norms that first he got a distorted version of history written for a government and then condemned the same government as ‘right-wing’ and ‘fascist’? In his entire statement he never touched the historical text as put in the Time Capsule. Why? Was Mrs India Gandhi responsible for the exact text written therein?

The two Marxist historians very cleverly avoided this real issue with the journalist interviewing them. Finally, what is the logic behind the argument about digging up the Time Capsule, that correcting a mistake was also a mistake? This incident hints the political sleight of hand of our Marxist professors whose actual worth was concealed only by the hallow of high posts they held thanks to the patronage obtained by the very ‘right-wing fascist dictators’.

keeping himself covered from all angles, sitting comfortably away… but making noises that could be turned into at some later date as proof of his commitment, entertaining thoughts of a position even higher…collecting feathers from wherever they fell to make the nest cushier. ... There is a cold ruthlessness (and) …a superior aloofness.
Raj Thapar
How the Marxist Eminent Historians Created a Gated Community of Traitors: The Conclusion

These lines enable us to appreciate Prof. Gopal’s ambivalent statements after Indira Gandhi’s defeat in 1977. It is worth recalling that Raj and Romesh Thapar were actively involved with the Communist Party of India for a long time during the 1940s to early 1950s and were highly influential during the early years of Indira Gandhi’s rule. With their help, many Marxists had occupied top positions. In other words, the Thapars’ experiences with the Marxist intellectuals were first hand and most authentic.

Fortunately for us, the aforementioned account about the Time Capsule was written by Harishankar Parsai who was himself a well-known Marxist litterateur. Since he was in the field of literature, he cannot be charged with any prejudices when he criticised the Time Capsule enterprise of these Marxist historians. In fact, he was dwelling on some other subject and the incident was taken as an example of scholarship.

Secondly, the incident of Indira Gandhi's Time Capsule is historically so recent that the whole thing can be easily examined afresh. It must, however, be noted that this incident regarding the Indira Gandhi’s Time Capsule has been all but removed from the memory of the academic circles which testifies the Marxist skill in distortion and cover ups. The text which was written for the historical Time Capsule more than thirty years ago is not available in any debate or discussion of contemporary history! Even a reference to it is seldom made. But those acquainted with the Time Capsule episode perfectly know that it was but a tiny specimen of partisan and frivolous history writing. According to an R. Prasannan:

There was hardly any history in it, let alone its Congress version.
R Prasannan The Week23 January 2000
Tarikh-i-Habibi—Being the Partial Chronicle of Irfan Habib: The Progenitor

Now, let us examine an interesting but representative example of how Marxist historians refer to that specimen of Marxist history writing as put in the Time Capsule. In the mysterious and curious words of Prof. K N Panikkar, another eminent Marxist historian:

Indira Gandhi had taken keen interest in the writing of history; (she) even embedded at the Red Fort in Delhi an official version of history in a time capsule. Their (Nehru and Indira’s) engagement was integral to the nature of their politics: the creation of a secular nation out of the diverse religious communities into which the people were organisationally, ideologically and emotionally divided. The attempt, therefore, was to retrieve the past from the colonial distortions and thus construct a nationalist history, which would reinforce the sense of commonness that the anti-colonial struggle had proffered. More important, to call attention to the fact that the secular character of the nation is not a contemporary construction but a part and continuation of its historical experience.

How cleverly the truth about the laughable history written for the Time Capsule is covered up by the eminent Marxist professor! The political beauty of this statement is indeed admirable. On the one hand Prof. Panikkar silently dissociates Marxists from the history text put in the Time Capsule, so that if someone had heard about its absurdities may not know about its authorship connected to the Marxist historians; and on the other, with greater cunning tries confidently to thrust his own political line and concoction under the garb of presenting Indira Gandhi’s concern for history. The incident and statements regarding the Time Capsule fully represent the craft and craftiness of Marxist historians and their way of history writing.

It is worth noticing how shrewdly Prof. Panikkar covers up the entire period of Islamic rule in India. Its foreign and invading character, its bigotry, various atrocities on Hindus with mass killings, destroying temples, imposing Jazia tax, converting Hindus by force and different methods, making slaves and selling them to Arab markets etc. All these barbaric acts have been neatly concealed and transformed into a ‘secular historical experience’. With what daring Panikkar tries to paint the entire period of Islamic rulers as the precursor of the present secular character of the Indian nation! This cannot be appreciated without understanding the essentially political propagandist nature of the Marxist historians.

And to do this, we must understand the essentially universal characteristics of Marxist history-writing. An inquiry that leads us all the way back to more than a century. To Soviet Russia.